Hello ladies (and gents), I wanted to write a blog about going to IMATS and what it was like for me. I realize I mostly post review blogs, to go along w/ my YT videos, but I thought you guys might find this a little interesting :)

So I've wanted to go to IMATS for about two years and I never had a chance to go until now. Being obsessed with makeup I have very few opportunities to talk to people who share my obsession, other than on the internet, so IMATS is like a beauty Mecca for me. I was lucky in that my dad gave me his frequent flyer miles, and that my uncles Bob and Mario live in Port Washington (Long Island), so my flight and lodging were free. I just had to pay for the ticket and public transportation, and of course makeup.

Being from Florida I am used to driving everywhere I go, so having to use the train system and taxis was a little stressful for me. So I bravely got on a flight for the first time by myself to Dallas and then to Newark, and then from Newark to Penn Station, and then from Penn Station to the Long Island Rail Road to Port Washington. It was a lot of traveling but I survived and was proud of myself for being able to do it all without any help (yes I know I'm sheltered).

Anyways I finally got to Port Washington and Bob was waiting for me at the train station. The train station is actually about 7 minutes away from the house. Port Washington is a lovely town and the house was situated on the shore of a large body of water, so pretty to look out at from the backyard. They even had full bloomed tulips all around the backyard, a sight rarely seen in Florida. We went to an authentic Italian restaurant that day, the food was so good. Well after that I don't really remember much because I passed out as soon as we got home. I was exhausted.

Me on the train to Penn day 1 of IMATS: 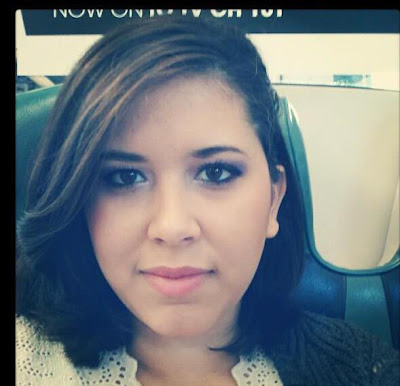 So the next day was day 1 of IMATS. I took the LIRR to Penn and then took a taxi to Pier 94 where IMATS was being held. The taxi driver was very pleasant and knew exactly where I was going, I tried to act as non-touristy as I could. Here is a picture of the line right at 8:30: 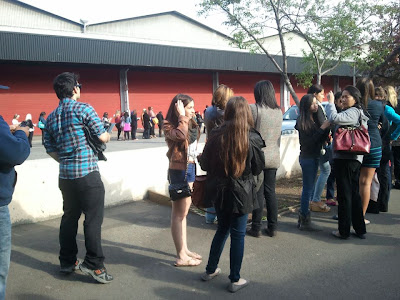 Hopefully you can tell how crazy long it was. So when I finally got inside I was given a 2-day wrist band and off I was into the madness. The first few hours I waked around and bought things. I only brought $150 to buy things so I had to be selective. I found a few makeup brands that I had never heard of before and some I really wanted stuff from like Eye Kandy. Here's my collective haul: 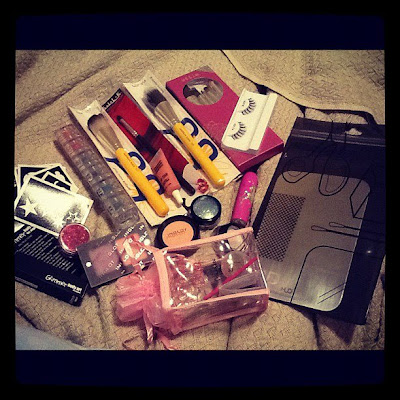 I'm going to review a lot of the things I bought so I'm not going to go into it really, but as you can see I got a Naked Comestics stack, Inglot eyeshadows, Bdellium brushes, Eye Kandy glitter, an OCC lip tar, and various other things.

So the first day was crazy bonkers, so may people everywhere, the Inglot booth was the most crowded. I saw a lot of amazing speakers like Kevin James Bennett: 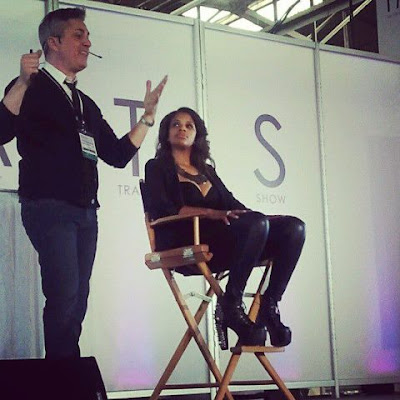 He was doing a demo on Miss Teen USA 2010. I learned a lot from his presentation, and he was so funny. One of the things he was talking about is how celebrities always ask him to make them look younger and he says makeup brushes aren't scalpels and that he knows the names of many good plastic surgeons ;)

There was a also a Stila fashion show that was a lot of fun. The Models makeup looked flawless, and there were two male models with body paint that were really hot! 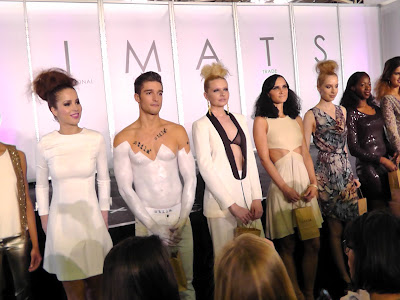 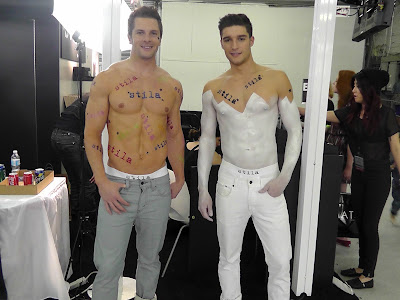 After the fashion show I headed to the main stage where Kandee Johnson was going to speak. I am a big fan of Kandee and her speech was so inspiring. 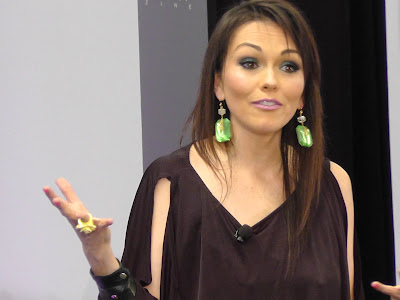 I posted a video of her speech, you can see it here.

After that speech I walked around some more and picked up a few more things. I also took a few pictures with some YT beauty gurus: 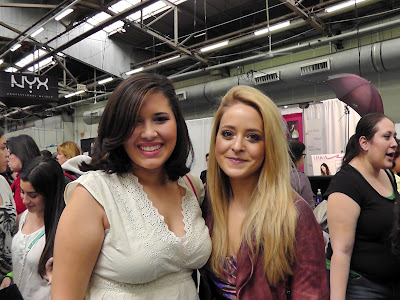 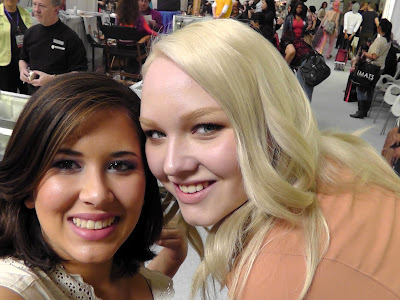 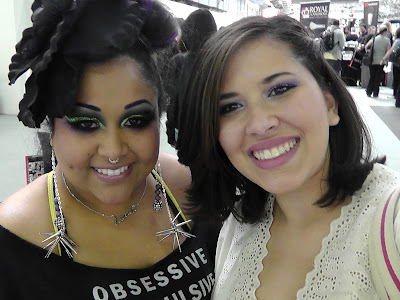 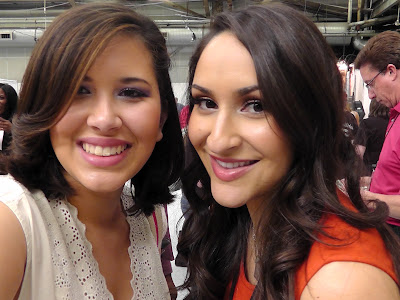 They were all nice but I have to say Julie G was really sweet. Julie had been standing from 8-5 at the Jesse's Girl booth, patiently taking pictures with her fans. The line was pretty long all day to take a pic with her, so I waited until the end of the day. She told me I looked really well put together :)

I also got a picture with Eve Pearl: 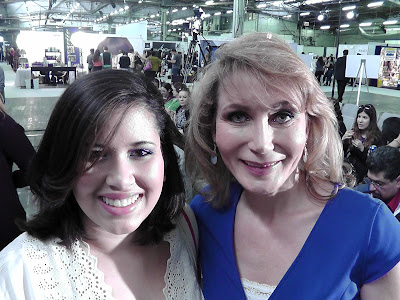 So that was pretty much it for the first day. I left IMATS and tried to find a cab to Penn unsuccessfully. I ended up walking there which was about 2 miles. My feet were really hurting and I was carrying a bag of expensive makeup in Hells Kitchen by myself, not the funnest experience but I survived. 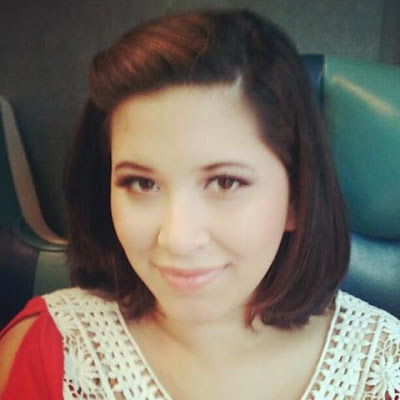 That day I woke up a little late in the morning so I was rushing to put on my makeup. I managed to wrangle on some falsies and was off. I very nearly missed the train but luckily I made it. On Sunday IMATS started @ 10 am, the line was still very long but I walked in easily b/c I already had my wristband. I got in super early and was able to look at the rest of the makeup in peace for a few minutes. I decided to see the first speaker of the day from Cover Fx, he showed us how to cover up a tattoo really well. Before the speaker I saw a fellow youtber/blogger Brianna (Brikasia) and I flagged her down like a crazy person to say hi.

After the Cover Fx speaker I went and saw Koren (aka Encore Makeup) doing a demo using Naked Cosmetics. He is so lovely and his demo was great, I wish I would have gotten a picture with him! 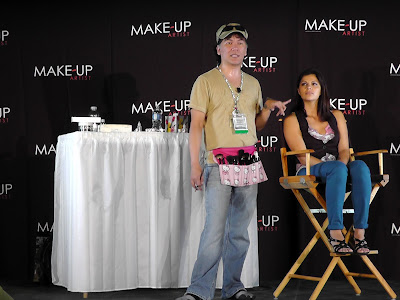 Later I met up with Brianna again and we went to a few booths to get stuff for her kit, and then we went to Eve Pearl's Booth. Here's a pic of the two of us: 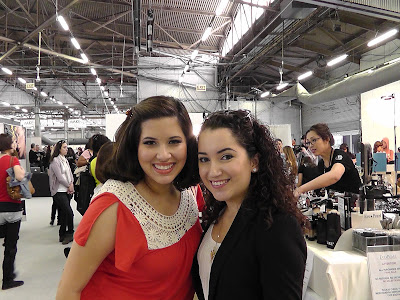 It was kinda funny b/c one of the makeup artists at Eve Pearl had just got done doing an intricate editorial look on someone and I went to tell her how beautiful her work was, well she told me she thought I was really pretty and wanted to do some touch ups on me. While I sat in the chair I asked her how long she had been with Eve Pearl, you'll never guess what she told me: "I'm Eve Pearl's mother"!!!!! I was so shocked, I didn't even know what to say. She did a really nice job fixing me up and it was such a cool experience.

After that me and Brianna both left IMATS for the city. My uncle Bob met me and we went to Chelsea Market. If you are visiting NYC I really suggest you go there, so many cute shops. There was a cute cup cake shop in there and we both got a cup cake for later.

My Uncle Bob and me: 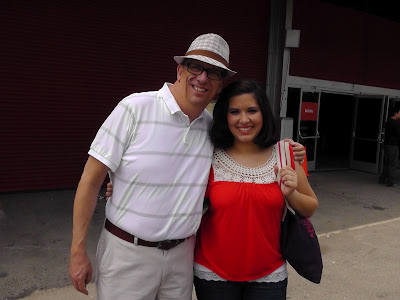 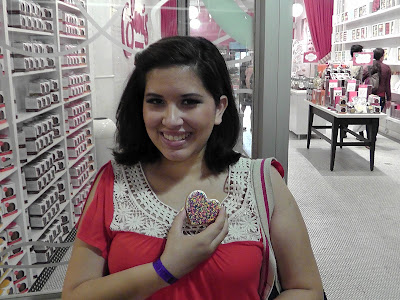 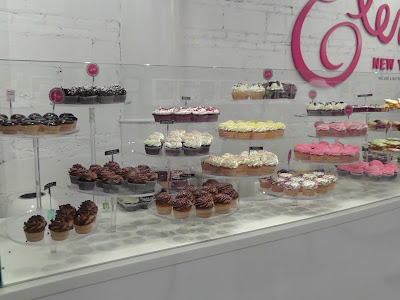 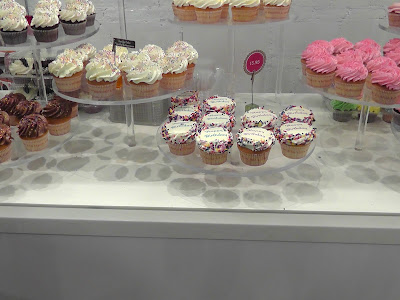 After Chelsea Market we ate at a really nice Mexican Restaurant and then we got a cab to Penn and ran to get to the LIRR on time.

My experience @ IMATS was one I'll never forget, I met so many wonderful people and I never felt alone the whole time I was there. I can only hope I'll get to go back next year :)
Posted by Cherie at 9:43 AM